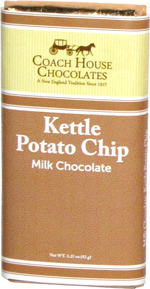 Taste test: This chocolate bar had a 3x5 section grid, with a domed top on each section featuring some diagonal lines and a generally smooth bottom, but also some lumps here and there, presumably from the potato chips inside.

We bit in to find some nice creamy milk chocolate, but as for potato chips, we could feel only occasional bits of crunch and not really any potato taste to speak of. None of the sweet-and-salty contrast that we expected. Pretty good as chocolate bars go, but a big disappointment from a potato chip point of view.

Smell test: Nice milk chocolate smell. Pretty sure we could smell some salty potato too.