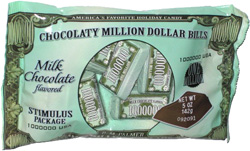 Taste test: These small candy bars looked to be about the same size as Hershey's Miniatures, but this wasn't an assortment, as the whole bag was the same "Milk Chocolate Flavored" variety (which I believe means it's actually not real milk chocolate).

The wrappers on each bar depicted a $1 million bill, and even more cleverly, the bag declared itself to be a "stimulus package." When I opened the first bar, I was surprised by the poor quality, as the wrappers weren't folded shut very neatly, the bar was a little scuffed-up around the edges, and the bar's design had no money theme at all, with just a plain patterned top. The bars also looked bigger once the wrapper was opened, each quite a bit larger than a Hershey's Miniature. The taste was decent but not great, as it tasted the same as all of the other R.M. Palmer chocolates, which generally aren't great, but I've gotten accustomed to the flavor as Palmer makes so many different holiday-themed chocolates.

This snack was discovered by Jeremy at Dollar Tree. Review published November 2010.