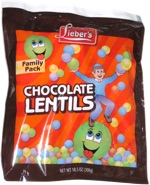 Taste test: Maybe reviewing over 7000 snacks has messed me up, because I can't recall so badly misinterpreting a snack bag as I did this one.

When I saw a bag that said "Chocolate Lentils" I thought, wow, chocolate-covered lentils, that's gonna be a weird one! Better buy it. The big bag contained 12 individual packets. I opened my first one and was completely surprised to see M&M's-like candies — that seemed like much more chocolate surrounding the lentils than I expected. But the misunderstanding didn't end there.

After eating a handful of pieces and not noticing any particular lentil taste (or any taste other than chocolate), I checked the ingredients, still fully expecting to find Lentils in there somewhere. When they weren't anywhere to be seen, I finally had my "Aha!" moment — it was all a metaphor! They were supposed to be chocolates shaped like lentils (except bigger). Or really, shaped like M&M's (except just slightly smaller). Still, that was a strange way to sell them, because even if they were shaped like lentils, the fact that they were an M&M's knockoff was so obvious that who would even think to compare the shape to lentils?

They had most of the same colors of shell as M&M's: orange, yellow, blue and green. The chocolate taste was quite different than M&M's. It seemed like a milk chocolate, but there actually wasn't anything dairy listed in the ingredients. The chocolate was OK but not anything great. That was a disappointment, because some Israeli chocolates are quite good.

From the package: “Product of Israel”

This snack was discovered by Jeremy at The Butchery, Brookline. Review published March 2017.