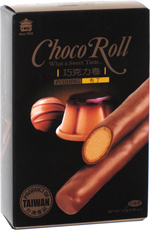 Taste test: The filled wafer rolls in this package followed the same general formula as the strawberry version, as the box contained seven individually wrapped pieces that each consisted of an outer chocolate coating surrounding a thin wafer layer, which in turn was filled with a fluffy creme filling. Each piece was about three and a half inches long and three-quarters of an inch in diameter.

This kind was supposed to be "pudding" flavor, which is an unusual thing for a chocolate snack. We love pudding (could eat it all day) but really this didn't taste or feel much like pudding. It was just a mild creamy flavor with maybe a hint of orange. It really didn't taste a whole lot different from the strawberry ones, which had barely any stawberry to taste. Still, a nice crispy, light feel and pretty good taste.