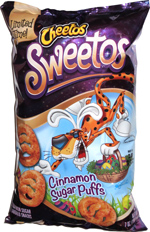 Taste test: We've eaten many different varieties of Cheetos over the years, and although the 78 kinds that we reviewed before this one varied quite a bit in size, texture, color, shape and flavor, the one thing that they all had in common as members of the Cheetos brand was cheese. This bag of Sweetos marked the major departure of being officially branded Cheetos that didn't have any cheese.

We opened the bag to find that the Sweetos were formed into sort of oval shapes, with two stripes across the oval to form three openings. We wouldn't have recognized that shape as anything in particular if not for the Easter theme on the front of the bag, as it depicts Chester Cheetah dressed up as the Easter Bunny, holding a basket of Easter Eggs while grabbing some more painted eggs and some of the Sweetos to add to his basket.

Each egg was about an inch and half long, with a lighter color than the more orange-looking ones pictured on the bag (they looked nearly like cheese-containing Cheetos). We crunched in to find a nicely crisp, very light and soft feel, with plenty of great cinnamon sugar taste. They tasted like buttery cinnamon toast, sweet enough without being overly sweet — and quite good.

Our tasting panel for these included a 5-year-old and a 7-year-old, both experienced and opinionated snackers. Neither had any interest in trying a Sweeto initially, but once they each eventually were talked into trying one by their father (who happens to be Taquitos.net's Secretary of Snacks), both returned for many more handfuls. Even as an improbably cheese-less Cheeto, this was an excellent snack.

From the package: “Get those taste buds jumping with every sweet soft crunch of Cinnamon Sugar Sweetos™ snacks.”