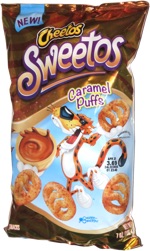 Taste test: When the original cinnamon flavor of Sweetos was announced, it was big news, earning headlines as the first-ever sweet version of Cheetos. They were quite good, but they didn't exactly change the world as much as some expected. As a Chief Snacks Officer, I have a pretty good memory for snacks, but when I saw this new flavor on the snack shelf of my 5th-favorite supermarket, I was only about 70% sure it was a new flavor ... until I noticed the bag of cinnamon ones right next to it.

This version had the same shapes as the originals, apparently intended to look like Easter Eggs. (At least that was the explanation on the original, as Chester had his Easter bunny costume on. This time, dunno why.) They had a similar color, kind of a slightly golden beige. I crunched in to find a soft feel with good crispness, with a nice mix of corn and caramel to taste. Sweet, but not overly so, very good!

From the package: “Try new Cheetos® Sweetos® Caramel Puffs for a taste of rich, melted caramel in one delicious puff.”