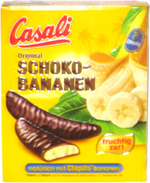 I say "vaguely banana-shaped" because they did have a curvature similar to a banana, but they were about half the length of your typical banana, flat but textured on the bottom, with a domed top. Considering that banana puree was just one ingredient among many sugar-sounding ingredients, these were pretty good, as they had a pretty good banana taste without being super-sweet. Personally, I find plenty of sweetness in a perfectly ripe banana without the need for any sweeteners, but this wasn't a bad taste, as it didn't seem all that fake. The texture was nice, as the filling was less dense than an actual banana, and the taste was a nice mix between the banana filling and the chocolate. The chocolate didn't melt on my fingers at all, so that was good. Some of our snackers liked them, while others thought they were too sweet. Some said they liked them on the first bite, but then ended up eating only half of a piece.

This snack was discovered by Jeremy at Wegmans. Review published July 2012.