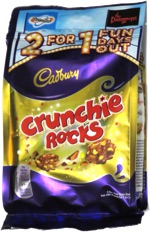 Taste test: I've long been a fan of the Crunchie Bar, which combines a light but very crunchy (hence the name!) honeycomb interior with a thick milk chocolate coating for an experience that you just have to try to understand how good it is. This spinoff product promised clusters of milk chocolate with bits of that same honeycomb, plus corn flakes cereal, embedded inside. 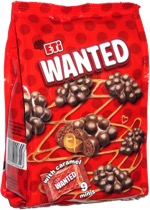 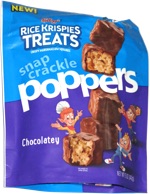 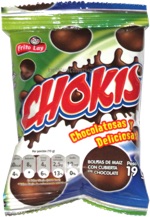 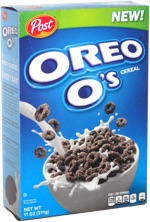 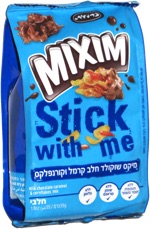 I opened the bag to find that the clusters didn't look particularly enticing, but the association with Crunchie still had me eager to try it. I bit in to find a fairly soft feel, but generally not a crunchy one, with occasional bursts of intense crunch when a tooth encountered a bit of honeycomb. There was proportionately more chocolate and less honeycomb to taste than the original bar, and I could hardly notice the corn flakes at all. Not bad, but nothing close to as special as the original Crunchie, so I'll stick with that. (The only other Crunchie spinoff product that we've tried was Crunchie Blast, which added Pop Rocks to the original bar and was quite spectacular.)

From the package: “Clusters of milk chocolate with cornflakes (16%) and honeycombed pieces (16%)”