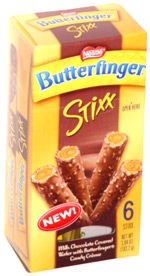 Taste test: These individually wrapped round-profile candy sticks were about 4-1/2 inches long and half an inch in diameter.

There seemed to be three layers: a Butterfinger crunchy peanut butter center, a light wafer cookie wrapped around the Butterfinger, and a chocolate coating on the outsie. The taste was pretty good, with a good mix of crunchy peanut butter and chocolate, and a light overall feel. The wafer layer occupied space to keep the overall density low, but it also tasted good. Overall the stick had a much lighter feeling than the highly dense regular Butterfinger bar. The taste was still quite good, though far less intense than a real Butterfinger. The amount of Butterfinger center that got stuck in my teeth was minimal.

From the package: “Milk Chocolate Covered Wafer with Butterfinger® Candy Crème” ... “Each stick is less than 100 Calories. Not a low calorie food.”

This snack was contributed to Taquitos.net by the manufacturer. Review published June 2006.