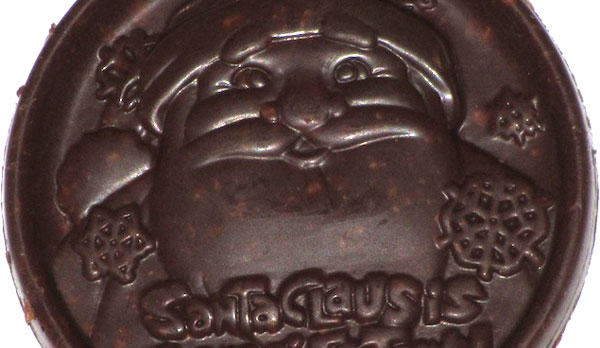 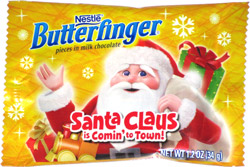 Taste test: This candy was shaped like an oversized coin, just under 3 inches in diameter, with Santa's face, some snowflakes and the words "Santa Claus is Comin' to Town" all protruding from the top of the coin. The surface was mostly milk chocolate, but there were some light bits of embedded Butterfinger that were vaguely poking through the surface.

We crunched in to find that this coin was really quite thick as candy coins go, and although it was mostly milk chocolate, the various small bits of Butterfinger inside the coin added a bit of crunch and some peanut butter flavor. It was more chocolatey and less crispety crunchy than a Butterfinger bar, but it was pretty good as a way to get a good hit of milk chocolate.

Smell test: Smells like a mix of Butterfinger and milk chocolate.

This snack was discovered by Jeremy at Walgreens. Review published November 2013.