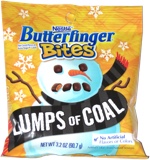 Taste test: When I recently reviewed skull-shaped Butterfinger peanut butter cups, I was quite impressed by the design and manufacturing craftsmanship in making the impressive shapes. I can't praise the Butterfinger team the same way for this one.

I bit in to find that they were less crunchy than a regular Butterfinger bar but still had a similar taste. You'd think that, as lumps of coal, they were supposed to be crunchier (or at least equally crunchy) but alas, no. Also, the bag was filled only about halfway. It was supposed to be two servings (or 4 "thoughtful portions" according to the bag), but I ate it all in one sitting.

From the package: “No Artificial Flavor or Colors” ... “The Good Stuff! Made in the USA* *with globally sourced ingredients” ... “Serving Size 8 pieces (40 g) Servings Per Container about 2 Amount Per Serving Calories 180” ... “Thoughtful portion™ 4 pieces 90 cal”