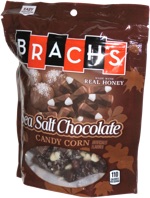 Taste test: This candy corn certainly looked different from the original kind, as it did away with the orange/yellow/white arrangement for something much darker. Each piece had a light brown wide end, dark brown middle and white tip, though the difference between the two browns wasn't as noticeable in the actual candies as it was in the picture on the bag. Unlike some of the special candy corn bags from Brach's like their Brunch Favorites, this one was not a mixture, as there was only the one chocolate variety included.

I grabbed a handful and bit in to find the usual candy corn texture, with a great chocolate taste that was better way than regular candy corn. It also seemed less sweet, which was an extra plus. Couldn't notice much in the way of sea salt. A great way to consume chocolate in bite-size pieces that won't melt on your fingers!

This snack was discovered by Jeremy at Target. Review published October 2017.