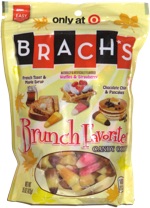 Taste test: Candy corn has strayed quite a bit in recent years from the single flavor that we've traditionally seen, but this new mix of three candy corn flavors — each based on a different brunch entree — from Brach's brought the candy corn renaissance to a whole new level.

The first one had a yellow top, orange middle and yellow tip, were supposed to taste like French Toast & Maple Syrup. The next kind, with brown top, pink middle and white bottom, promised Waffles & Strawberry (and the picture also showed some whipped cream on the waffles). Finally, the ones with light brown on top, yellow in the middle and darker brown on bottom were supposed to be Chocolate Chip & Pancakes (with butter and syrup also shown).

We shared the bag with lots of people, and reactions were all over the map. All of the flavors were quite sweet. Different people pointed to different kinds for having the best match to the purported flavor, with most finding at least one to be a really good match. Some people wanted to try all three kinds and ended up coming back for seconds and more, while others tried one and declared it to be awful, refusing to try more.

Like them or not, this creative mix of candy corn was far more interesting to discuss than your standard candy corn!

Smell test: Sweet and strong — it really does smell like I'm at a diner and they've just dropped off the three named dishes on the table.