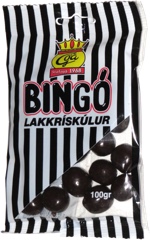 Taste test: These dark chocolate-covered balls from Iceland varied a bit in size and shape, but generally they were about a half inch in diameter. They looked like they could be similar to lots of things that we've tried before (caramel balls, malted milk balls, etc.), but it turned out that they were something entirely different — inside that chocolate was licorice!

It turned out to be a slightly odd combination for biters, texture-wise, as the licorice was much more rigid than the milk chocolate coating, so it was awkward to bite in and feel the licorice. But when I sucked on them to dissolve the chocolate and the continued to suck on the licorice, it was an interesting taste transition, and a good one. The black licorice was very good, with an intense flavor. For me, this strange combination worked!

This snack was discovered by Amy and Mary Anna in Iceland. Review published May 2016.