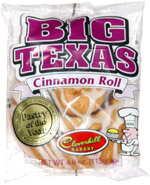 Taste test: This round cinnamon roll was large for a plastic-wrapped pastry and tasted quite good.

The soft roll included a spiral of cinnamon and a sprinkling of frosting, and there was so much of it all that it made a pretty good-sized breakfast. The wrapper suggested microwaving it briefly, but I ate this in my microwave-less car while waiting for a tow truck, so I ate it cold. Even cold, it was a very enjoyable snack.

This snack was discovered by Jeremy at Save-A-Lot Food Stores. Review published July 2009.