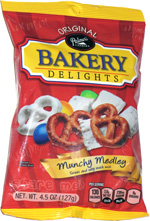 All three of those brand names just mentioned have been used for ease of description, as I suspect all of them were actually knockoffs. It was hard to know this for sure in the cases of the Chex and Cheerios, particularly since they were coated in white chocolate, but the M&M's really didn't taste like M&M's. But there were very few of the fake M&M's anyway. The coated cereal pieces were quite good, with a nice brittle texture beneath the coating. In many cases, the cereal pieces were stuck together by the white chocolate into clusters, with as many as eight Cheerios stuck together in one case, and those pieces were fun to eat. Overall, a pretty good mix.

From the package: “Sweet & salty snack mix” ... “For five generations our success has been, and will always be, based on delivering the highest-quality product to the consumer for the best possible value.”