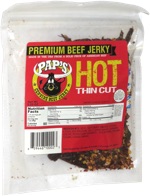 Taste test: This jerky had a fairly dark color and the bag was filled with lots of bits of pepper seeds, though most of those had sunk to the bottom of the bag, rather than being attached to the meat. For the purpose of the taste test, I just grabbed pieces with whatever seeds were attached to them and didn't attempt to dip into the reservoir of extra seeds in the bag.

The pieces were indeed cut thinner than Pap's Grippo's Flavor and had a crisper, less moist feel. Even with just the relatively sparse seeds still attached, this jerky packed a nice strong kick of heat, with a nice taste too, and the heat lingered for a very long time in the aftertaste. The thin jerky was slightly tougher to bite into but softened up quickly enough. Very tasty, a nice one for people who want some burn!

From the package: “Smoke flavor added” ... “Made in the USA from a solid piece of American beef”

This snack was contributed to Taquitos.net by the manufacturer. Review published May 2020.