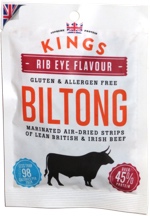 Taste test: This smallish bag contained strips of jerky in various sizes and a wide variety of thicknesses, with a fairly dark color. Most of the pieces were small enough that I didn't have to break them down into smaller ones to bite in.

When I tried several pieces, I found the thinner-cut ones had an excellent texture, soft and easily chewable — and very tasty too! The thicker ones were equally tasty, but they didn't have the same soft feel and took more effort to chew on and eat. The extra chewiness wasn't a huge problem, but the inconsistency of texture did detract a bit. Still, pretty good jerky.

This snack was discovered by Amy and Mary Anna in London. Review published .